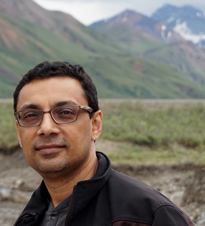 Research Focus:
1. Adaptive Co-evolution of Genes in Microbial Pathogens.
Similar to genome-wide association studies in humans, given a large sample size, the co-evolved loci or
adaptive mutations in microbes (pathogens in particular) can in effect be predicted for their association
to specific host-compartments, geographical locations, epidemic/endemic outbreaks, or disease
phenotypes in hosts. The present pace of genome sequencing indicates that, by using affordable and
rapid sequencing technologies, tens of thousands of microbial genomes will be sequenced during this decade, thereby enabling us perform such association studies in near future. This project plans to
develop an analytical tool to detect co-evolution of genes across the genome, to be used to assess
phylogenetic congruence for the entire tree (i.e. involving all isolates) or for any sub-tree (i.e. across
specific phylogenetic clades) for a given species. This information will provide important insights to
create genomic network of adaptive loci functioning within a particular bacterial lineage or across
multiple lineages in parallel.

An important extension of within-species co-evolution studies would be to study cross-species interplay
of such adaptive forces in a given habitat. His earlier work on Escherichia coli and Salmonella enterica
subspecies I core genes demonstrated that there was a significant overlap in the functional trajectories
of adaptive evolution in two species. Recent studies showed that specific virulence factors in S.
typhimurium stimulate strong host inflammatory response, and eventually help the pathogen gain an
advantage in its growth competition with the resident microbiota. Therefore, it would be important to
study the role of co-evolving metabolic pathways in the interactions/competitions of microbiota in hostcompartments,
e.g. in the inflamed gut. Such a study can offer the possibility to identify new targets for
intervention.

2. Role of Truncation Mutations in Virulence Evolution.
Occurrence of pseudogene formation via truncation mutation and gene deletion is a common
phenomenon in bacterial world, especially in the evolution of the host-adapted/host-restricted bacterial
pathogens. A general belief is that pseudogene formation and gene deletion are results of reductive
evolution, following a ‘use-or-lose’ dynamics which suggests purging of traits that are of no use in the
organism. Based on the preliminary studies on Salmonella, however, Dr. Chattopadhyay’s lab
hypothesizes that accumulation of truncation mutations leading to pseudogene formation can often be
result of adaptive evolution. We anticipate that such events rather follow a ‘die-or-lose’ dynamics
indicating purging of traits that are otherwise deleterious to the organism.

The goal of this project is to understand the role of gene inactivation via truncation mutations in the
(patho)adaptive evolution of bacteria. Events leading to evolutionary convergence are often adaptive
and positively selected. Based on the detection of recent non-random convergent events of truncation
mutations, the lab proposes a novel approach to distinguish adaptive truncation mutations from
reductive ones. The primary focus in this study will be on Salmonella, along with other pathogens, for
developing the analytical tool to decipher the adaptive significance of gene truncation mutations leading
to the loss of protein function.

3. Clonal Evolution of Virulence and Antibiotic Resistance.
Most bacterial species, pathogens or commensals, are clonal in nature, represented by the strains with
distinct phenotypes circulating as a limited number of genetically related (i.e. clonal) lineages. The stability of such (adapted) clonal lineages has been demonstrated to be strong enough, both temporally
and spatially, to decipher consistent clonal association with important traits like specific virulence
potentials or antibiotic resistance profiles.

Multilocus sequence typing (MLST) is presently the method of choice for determining the clonal
structure of a bacterial species, and for numerous important pathogens the MLST schemes have been
standardized. However, since the STs are discriminated based on the genetic relatedness of a set of
housekeeping genes, they are neither uniform nor fine-tuned with respect to the pathotypes and
resistance/susceptibility profiles of their representative strains. For example, in E. coli, ST73 includes
pathogenic strains like CFT073 that causes pyelonephritis in humans, as well as commensal strains like
ABU83972 and Nissle1917 that have been used as probiotics in humans. Also, MLST requires
involvement of 7 loci, limiting its efficiency in terms cost and time. This work aims to detect potential
candidate genes and mutations therein as high-resolution clonal markers for selected bacterial
pathogens to associate specific virulence and/or multidrug resistance properties of interest.

4. Microbial Species-specific Variome Databases.
Variome as a term refers to the sum of genetic variations in a species population. Microbial Variome
Databases would stand for species-specific genomic resource databases. The species-specific approach
will be aimed at pathogens important in environmental, food and infectious diseases research (primarily
in Indian context) such as Helicobacter pylori, Streptococcus pneumoniae, Klebsiella pneumoniae,
Mycobacterium tuberculosis, Escherichia coli/Shigella spp., Salmonella enterica, Pseudomonas
aeruginosa and Staphylococcus aureus. For each of these species, the plan would be to map all the
variations at pan-genomic population level and perform genome-wide analysis to study (patho)adaptive
co-evolutionary network of genes/proteins and their association to specific host-compartments,
geographical locations, epidemic/endemic outbreaks, or disease phenotypes in hosts. This would
eventually allow the shift of bacterial genomics to the level of population genomics, involving:

(a) databases of genetic variations with the predictions of possible functional and adaptive ones for the
pathogens (linked to specific disease phenotypes, origins of isolation, etc.);

(b) genome-wide information on potential targets for vaccines, antibiotics and other therapeutics; and

(c) nation-wide as well as global surveillance system that enables rapid determination of newlyemerging
or re-emerging pathogenic clones and of the genetic mechanisms behind the emergence.